The road, also known as the "convent road" (or "ex powder road"), is a very nice walk surrounded by greenery. It's very scenic and it's suitable for the whole family.

In our case the walk was a little longer, because we decided to return through the picturesque district of Zuel. From there it would also be possible to make a quick visit to the Olympic ski jump trampoline in Cortina

. After that we'll return to the center of Cortina along the route of the ex-railway.

It is a walk of almost 9 kilometers (5.5 mi), most of which on paved roads and without major differences in height, so quite long, but not particularly tiring. The time needed for the walk is about 1 hour and a half, but it'll probably take more, because you'll want to stop at the Pianozes lake or in the most panoramic points.

The walk starts from the Cortina bell tower

, from which you continue in the direction of the Church of the Difesa

. From here you'll take the road in the direction of the parking lot "Via del Parco"

. The powder magazine was built by the municipality of Cortina d'Ampezzo in 1859 as a warehouse for gunpowder, which was used for the construction of tunnels. The small building was renovated in 2009, but if you decide to visit it you'll have to pass through a small road that seems private, then you'll need to walk next to the courtyard of the vet. Currently the building is not at its best and when I went to visit it the smell was not very pleasant either. The fact that it is very secluded makes it a possible "dropping" area, so maybe it's better if you see it only in the photograph below. 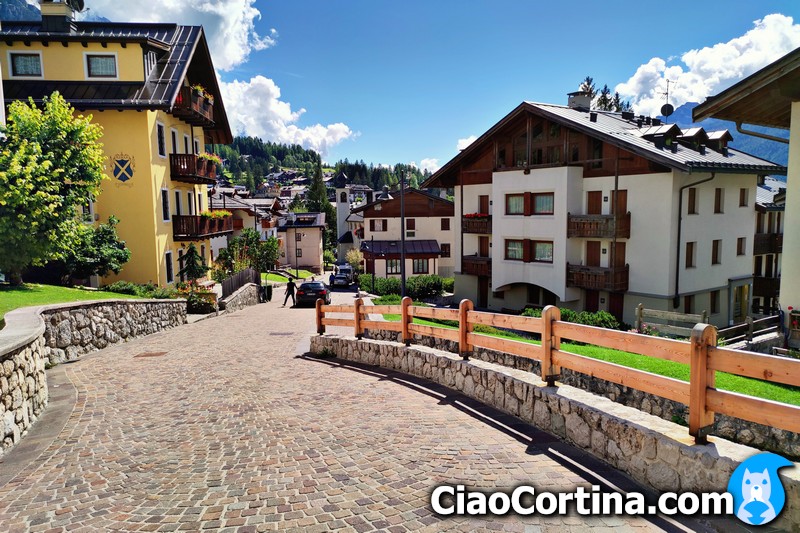 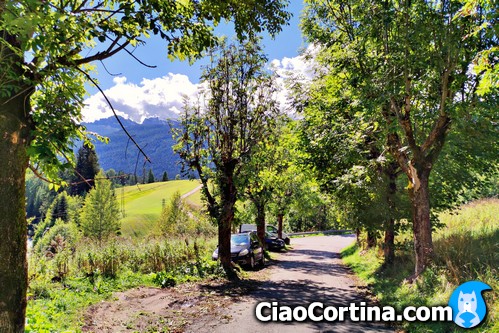 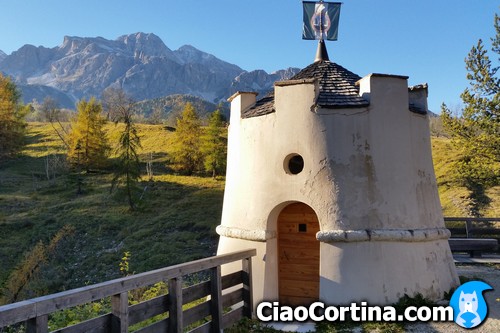 (1) The road from Campanile to the church of Difesa. (2) Tree-lined avenue towards the Boite River. (3) The former powder magazine.

Once you cross the wooden bridge over the Boite River you'll face a very short, but intense, climb. When you'll reach the top, you'll find some of the most beautiful meadows in Cortina. From here the panorama opens up in all directions, offering an astonishing view of the town of Cortina, Zuel and the mountains Faloria, Antelao, Tofana and Pomagagnon. Here you can rest on one of the benches available, or you can sit on the grass. If you see that the lawns have been recently cut, it could also be a beautiful place to organize a picnic. 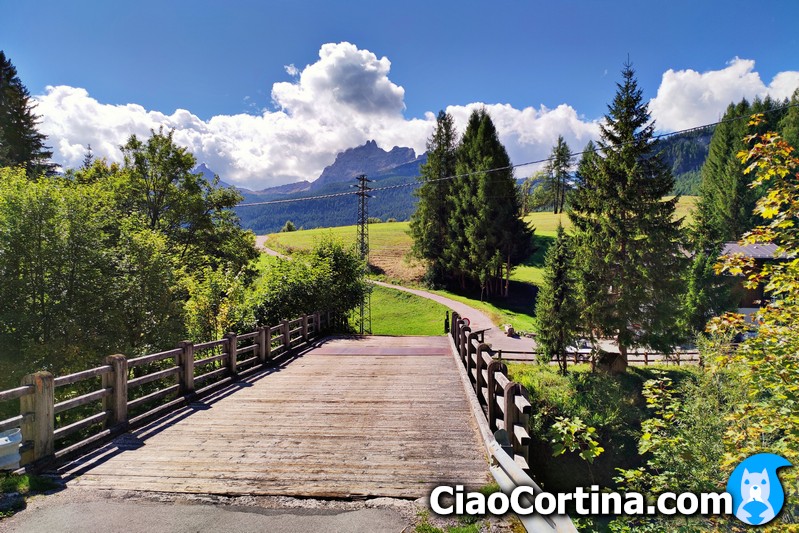 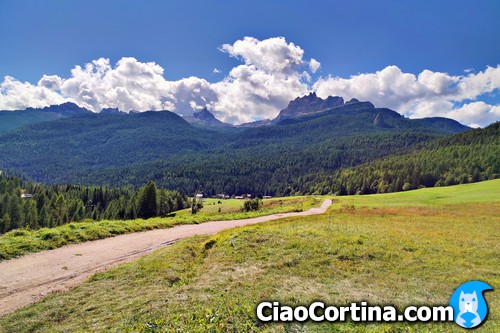 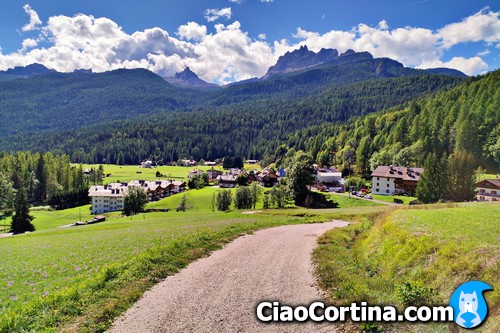 (1) The bridge that crosses the Boite River. (2) The route of the former powder magazine. (3) The descent towards the district of Campo.

The road continues for a few hundred meters, to the district of Campo di Sopra, where you'll see the picturesque San Candido little church

. This little chapel was built in 1740 to commemorate a fire that had destroyed the district of Campo in 1712. The church was rebuilt in 1928, after being almost completely destroyed by a fire in 1916. If you are interested you may want to stop and look at the beautiful 1549 wooden altar, carved by Michael Parth. For those interested in more information, inside the church there are beautiful brochures about the history of the church and its artworks.

After visiting the little church, continue south until you reach the road intersection, where you'll go right, in the direction of Campo di sotto and Pianozes. This intersection will be useful on the way back: if you decide to avoid the Zuel district you'll need to remember to take this road. If you'd go in the other direction, towards Salieto (left for you, straight when you'd come back) you could reach the center of Cortina walking through Via delle Guide, that is an alternative route, but way less panoramic. 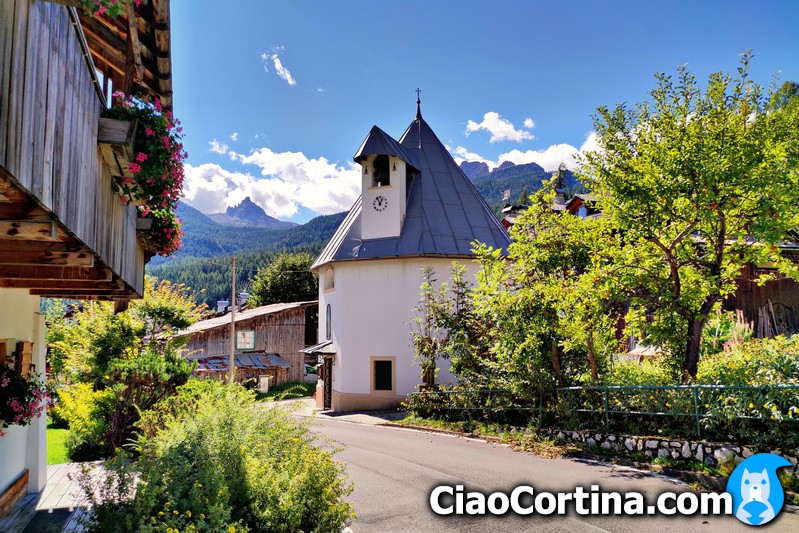 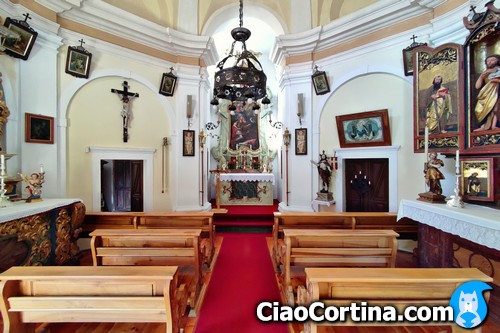 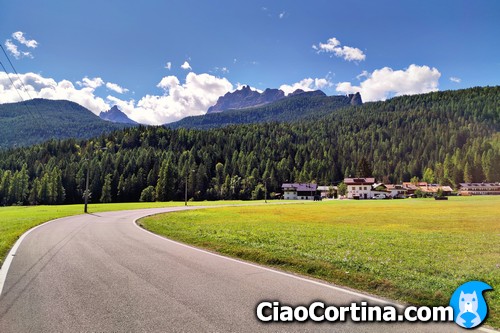 Once you reach the end of the straight proceed a few meters in the direction of the wood, on the left you'll see the crossing to Lake Pianozes. Get ready to face about 200 meters of steep slope, at the end of which you will find a cross. Take the left and after a few meters a beautiful alpine lake will appear. In the summer period there is a kiosk where you can refresh yourself with drinks, ice-creams and sandwiches. Alternatively you can also stop at the homonymous restaurant, a very nice place where you can taste high level cuisine with prices proportionate to the high quality offered. The walk, for now, took us about 40 minutes, for a total of 3 kilometers and a half (22 mi). 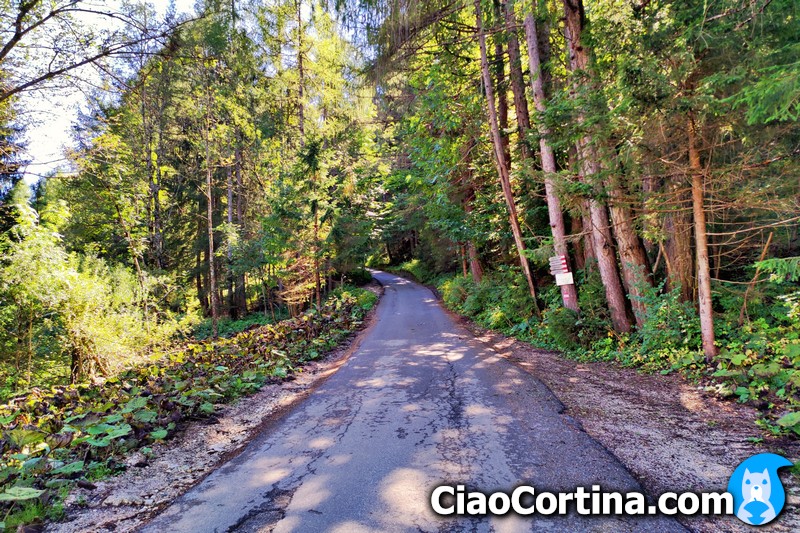 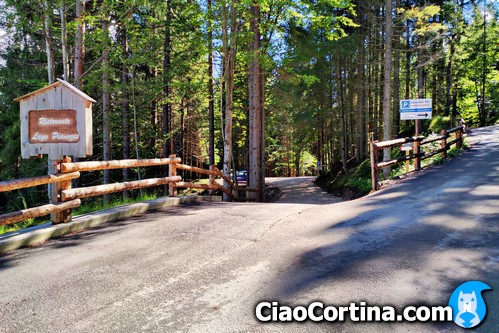 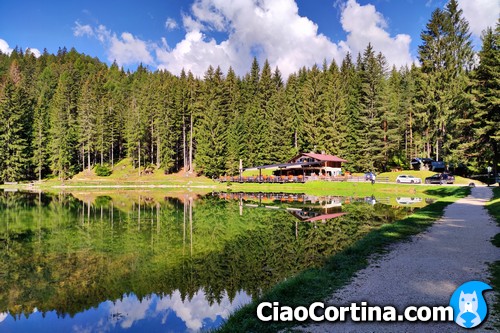 After resting a bit in the surroundings of Lake Pianozes, you have to think how to continue your walk:

Now that we decided to go to Zuel, go back to the same descent that took us to the Pianozes lake. Once you reach the electrical tower (a masonry small tower) and the bus stop, take the right at the crossroad and walk along the paved road for about a kilometer and a half, crossing the bridge over the Boite river and going up in the direction of the district of Zuel

. At the end of the climb, if you are interested, you can make a small detour in the direction of the Olympic trampoline of Cortina

, one of the less valorized areas of Cortina, but really suggestive to visit. If instead you want to go back towards the center of Cortina, just follow the road signs of the bike path in the direction of Dobbiaco. 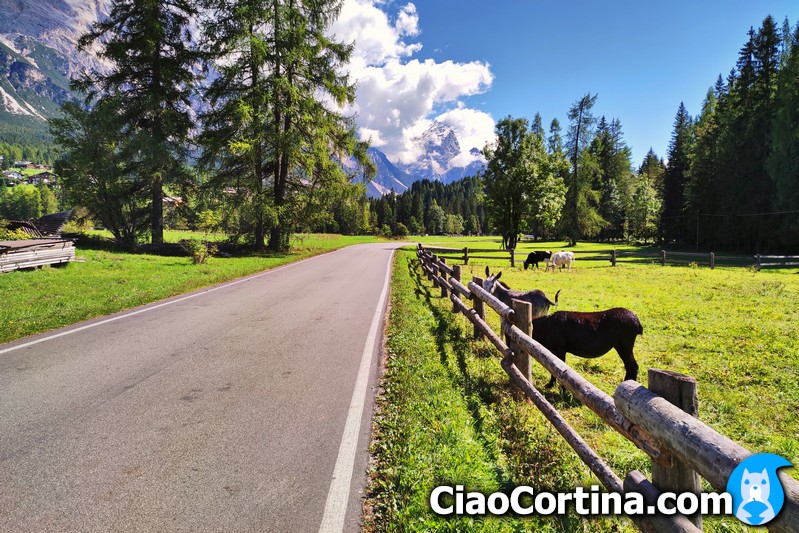 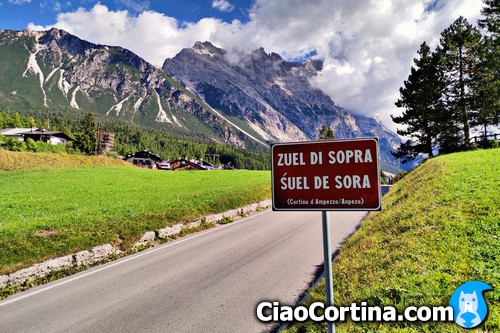 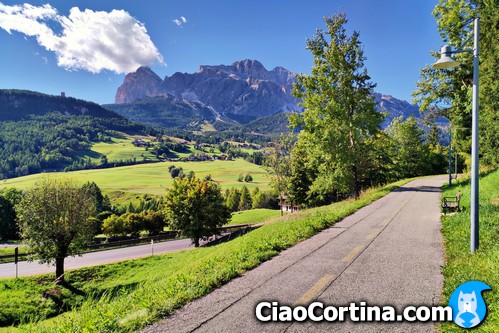 In about thirty minutes along the route of the former railway of Cortina you'll reach the center of Cortina.

Once you have crossed the high bridge over the road, near the Faloria Cable Car, take the road that goes down to the left, to go back to the bell tower of Cortina, the starting point of our walk to Pianozes Lake.

Before the end we want to tell you some more information about the lake you are going to visit. Lake Pianozes is a small artificial lake created for tourist purposes. The restaurant that rises on its shores is managed by the Regole d'Ampezzo and is currently run by Massimo Alberti. In 2019, the Regole d'Ampezzo carried out several works to improve the Pianozes area, consolidating the access road and expanding the restaurant. As a result of these interventions, the shores of the lake have been made accessible to people with disabilities and the peninsula has been expanded to host the kiosk that serves sandwiches, toast and cold drinks.

As you cross the large meadows of Campo, you may see Hotel Tiziano in the distance, which has been closed for several years. Many people don't know that the hotel was named so for a very specific reason. There is a theory that claims that the famous italian painter Tiziano Vecellio was not born in Pieve di Cadore, but rather in Cortina d'Ampezzo, in Campo, as we can read in this article written (in Italian) by venetostoria.com. It has been written by the famous historian Mario Ferruccio Belli. Is it true? Sincerely we don't want to enter into the merits of the discussion, which is already complicated enough, we only want totell you what we think is an interesting anecdote.

Without wishing to consider this thing neither a reason for pride nor a reason for shame, but only an historical event, Cortina was very important during the fascist period. Here the Savoy family came as guests, as well as Mussolini's daughter, Edda. In the Campo area, in 1934, took place the "Campo Mussolini", a summer camp where they were hosted three hundred young "sons of Italians abroad", as you can see in this Youtube video of the "Istituto Luce", a powerful propaganda tool of the fascist regime.

Hoping that you liked this page on the walk from the center of Cotina to Lake Pianozes, before saying goodbye, we remind you that you can read all the other hike paths we recommend you to do in Cortina, or alternatively read all the other pages we have written about Cortina d'Ampezzo and its surroundings.

Related Alternative route: from Zuel to Pianozes and back to Zuel If you want to walk more: From pianozes to Lake Ajal Another amazing hike in the area: The "Gores of Federa" Safety tips for novice mountain hikers Some of the best hikes you can do in Cortina