The museums of the Regole of Cortina d'Ampezzo are three museums that have been built to keep alive the culture and tradition in the Ampezzo valley. They were created by the "Regole d'Ampezzo", a centuries-old institution for the protection of the territory, established with the purpose of preserving forests and pastures from abuse and ensuring their use responsible by the Regolieri, or the original people of Cortina. To date, the tasks of the Regole have evolved to include the management of their property, including their cultural heritage.

To simplify the job of the Regole as much as possible, we could say that the territory of Cortina is owned by all the original families and no one can sell, build or speculate on these lands without the majority of those entitled to vote agreeing, thus guaranteeing the protection of the territory for many centuries. The work done by this institution has been so well done that two famous Ampezzo people decided to give their own collection to the Regole d'Ampezzo in order to preserve it for future generations. We are talking about Mario Rimoldi and Rinaldo Zardini, to whom the two eponymous museums run by the Regole d'Ampezzo are dedicated.

, the Palaeontological Museum “Rinaldo Zardini” and the Ethnographic museum "Regole d'Ampezzo" are housed inside the Alexander Hall

, a multi-purpose center located a few steps from the center of Cortina and that can be easily reached even walking.

...are built to keep alive the culture and tradition in Ampezzo...

Sometimes, inside these structures, it's possible to view temporary exhibitions, often curated by the guests of Cortina, such as Vittorio Sgarbi, a famous Italian art critic. In the next chapters we'll see the three museums in detail. 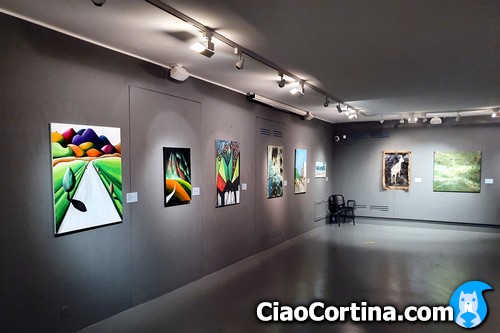 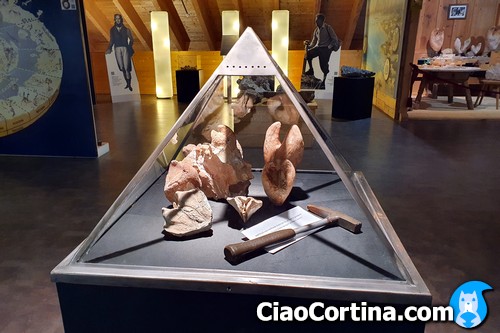 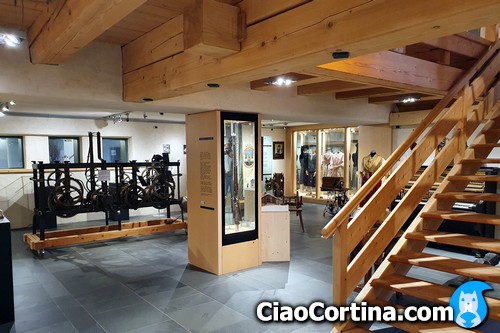 The Modern Art Museum "Mario Rimoldi" in Cortina d'Ampezzo was inaugurated in 1974, after the donation by the widow of Mario Rimoldi, Mrs. Rosa Braun, of her family collection to the "Regole d'Ampezzo". The collection boasts over 300 paintings and is considered one of the most complete private collections of modern Italian art.

In the museum are shown the works of many great Italian painters of the early 1900s, including artists such as De Chirico, Morandi, Martini, De Pisis and Rotella. The exhibition is developed on two floors and allows you to see many great works, such as "the French Soldier" of de Pisis, "the Bathers" of Carena, "the Zolfara" of Guttuso, the "San Sebastiano" of Garbari, the "Ile des charmes" by Savinio and the "Concerto" by Campigli, together with many others. It is worth a visit for sure, whether you are art lovers or just curious, also because the price of the ticket is really honest. For more information, we invite you to visit the official website. 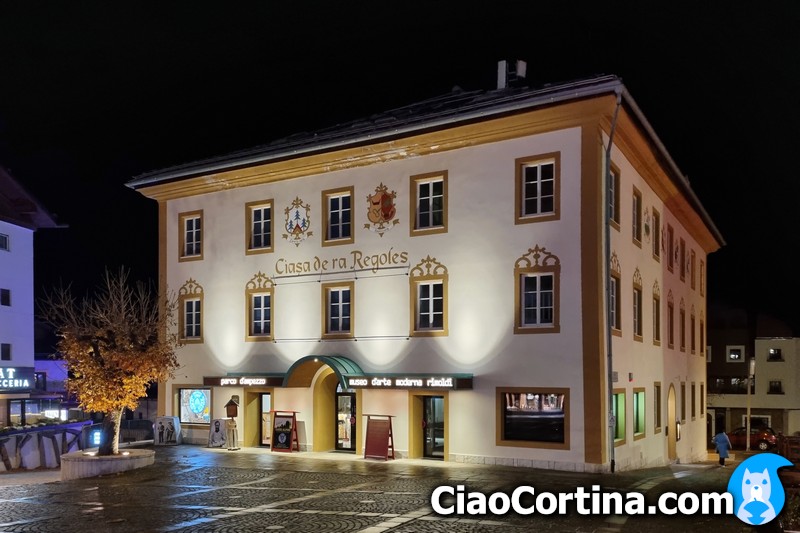 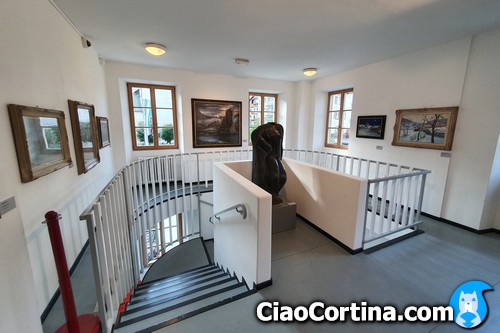 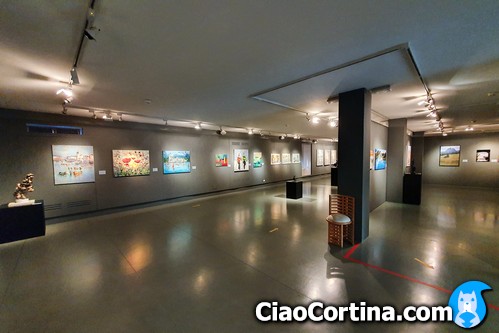 Rimoldi has been not only a great art lover, but also a very important character for the cultural growth of Cortina d'Ampezzo, both as mayor and as president of several cultural associations. His life was very intense, after he studied hotel management in Rome, he became passionate about art and started collecting works of emerging artists, such as De Pisis. With the expansion of his collection he knew many representatives of the artistic environment of the time, which led him to organize several exhibitions in Cortina, first provincial and then national.

In addition to being a great Art lover, Rimoldi was also the manager of the Hotel Corona of Cortina, where over the years he hosted various artists, including, for example, Giorgio De Chirico, who spent his Christmas vacations there, even composing a poem for the occasion. Rimoldi's life was undoubtedly very full, if you want to deepen you could read the wikipedia page dedicated to him, but consider that it's in italian. 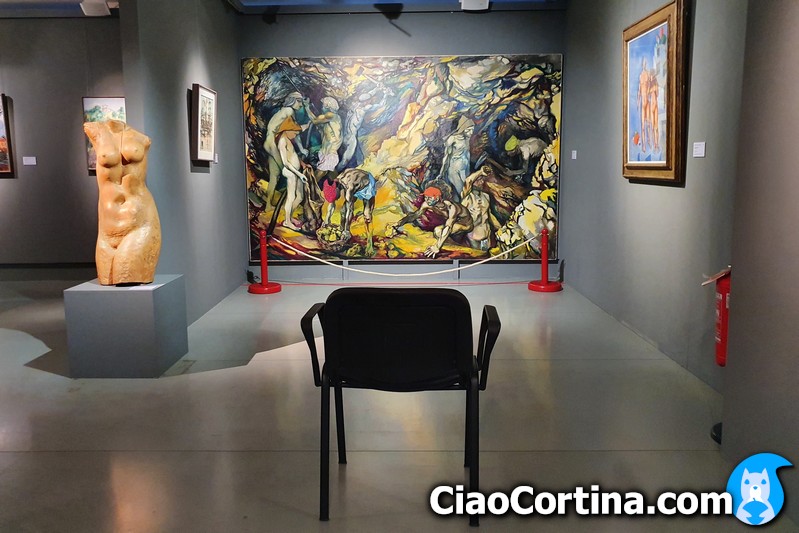 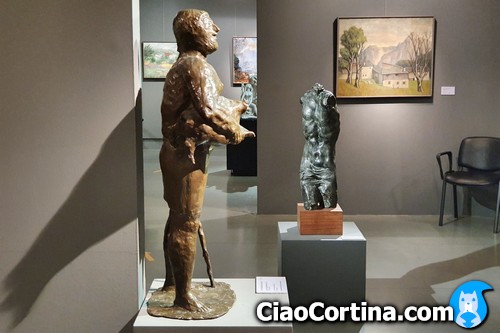 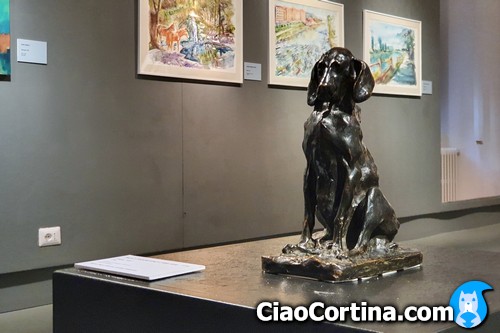 (1) A chair to enjoy the painting. (2) Two statues on display at the museum. (3) Other works shown in Cortina.
Continues after the AD...

The paleontological museum "Rinaldo Zardini" was founded in 1974 thanks to a donation by Rinaldo Zardini, who wanted to spread the geology and paleontology culture of the Ampezzo Dolomites to everyone. It is one of the largest existing collections of fossils, over 20,000 specimens belonging to over 1000 different species. Inside the museum it's possible to see many finds of marine creatures that lived in these areas, before the continental drift made the Dolomites emerge from the water. The fossils are perfectly preserved and, in most cases, you can see even the smallest details, such as the holes with which the sponges absorbed water, despite the fact that almost 250 million years have passed.

Scholars from all over the world come to visit this collection, which over the years has been further expanded with the help of many enthusiasts, who have found new specimens, including fossils of plants. Among the most significant materials on display, there are numerous specimens of megalodon bivalves, organisms adapted to a tropical marine environment, such as the one that preceded the genesis of the Dolomites. A small space is also dedicated to the reconstruction of Zardini's personal study. 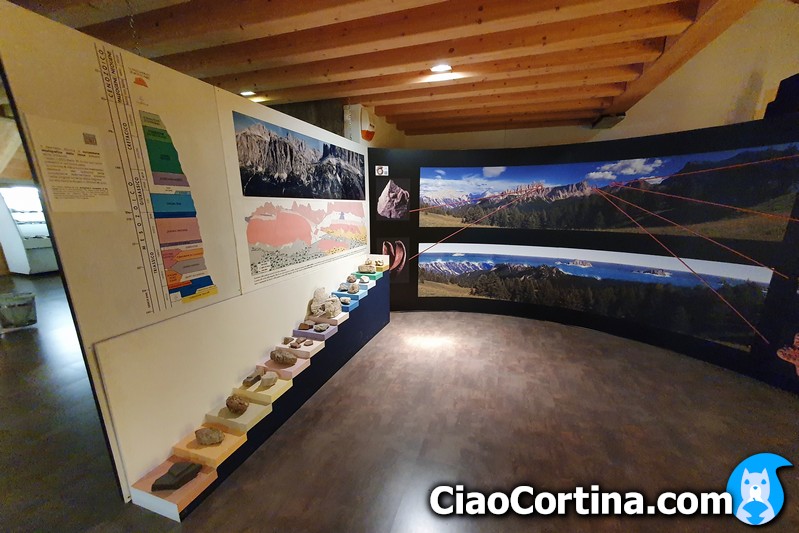 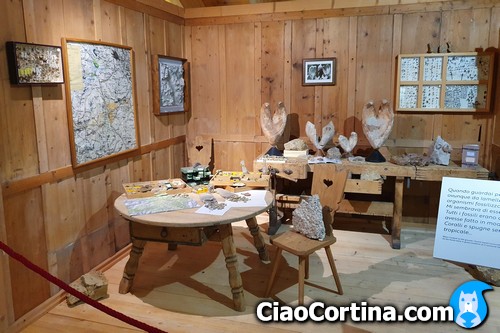 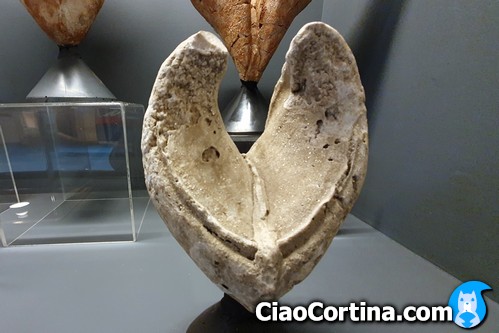 (1) Exhibition at the Paleontological Museum. (2) Reconstruction of Rinaldo's study. (3) Detailed view of the bivalve megalodon.

The collection is one of the most complete in Europe and also includes some specimens of amber millions of years old. Few know that Cortina is a very interesting area from the paleontological point of view, especially because under the Tofane mountains has been discovered the most ancient invertebrates preserved in amber in the world. They are over 230 million years old, almost 100 million years older than any other invertebrates preserved in the amber ever found globally. The amber has been called precisely Ampezzoa Triassic. This discovery was really very important for geologists around the world, here you can read a scientific article, in english, that deepens the topic.

The Palaeontological Museum “Rinaldo Zardini” is undoubtedly a beautiful museum, especially for those who have children, because they can actually see the story of the world, and not read it in textbooks. We sincerely recommend the visit of this museum to everyone, as it is objectively interesting, not only for a didactic purpose. For more information, here is the official website.

We want to conclude this chapter with a few words about Rinaldo Zardini. He was born in Cortina in 1902 and has always been a great lover of photography. His naturalistic activity began with the cataloguing of Ampezzo's biodiversity, the results of which can be seen in the first room of the museum. In 1935, Rinaldo collected his first fossil and, since then, he continued to collect, study and catalogue various fossil finds, arriving at having one of the largest and most interesting collections in the world. A large part of Zardini's studies focused on the faunas of the Ladin era (one of the triassic epochs). He approached the subject of fossils so well that his books have become university study texts. The most important work of Zardini was undoubtedly "Fossils of Cortina: atlas of Echinoderms" of 1973. The contribution of Zardini in the world of fossils was so large that he was awarded with the degree honoris causa in natural sciences and was appointed affiliated researcher of the Smithsonian Institute of Washington. 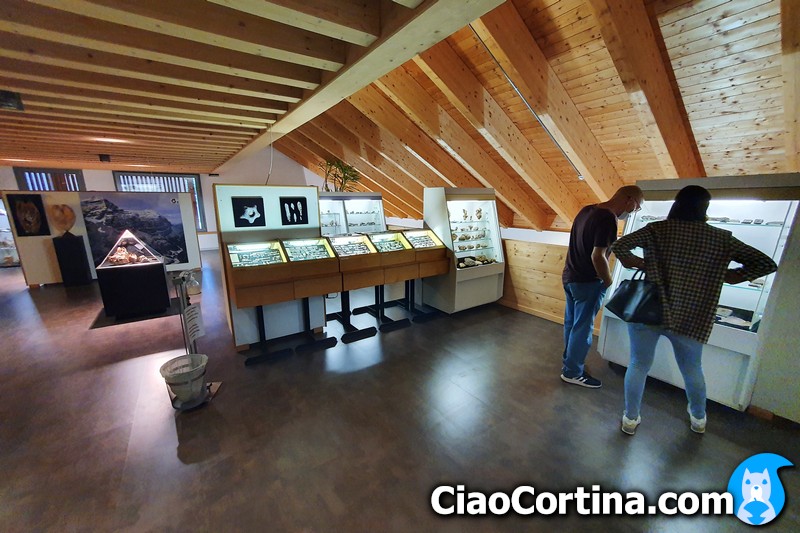 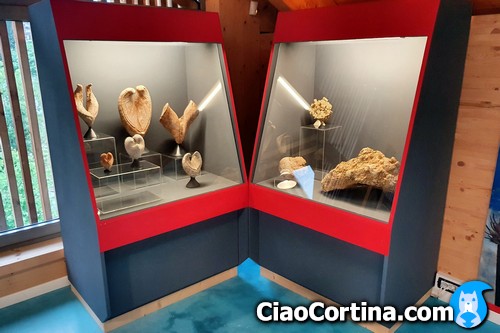 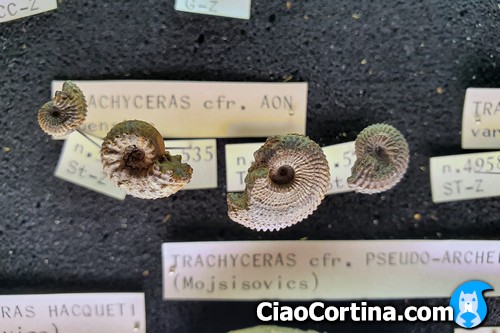 (1) The rooms of the Paleontological Museum. (2) Fossils exposed in a showcase. (3) A detail of the smaller fossils.
Continues after the AD...

The Ethnographic museum "Regole d'Ampezzo" is an exhibition dedicated to the culture of Ampezzo and to the traditions that has been preserved over the centuries thanks to the presence on the territory of the Regole. The museum is housed in an historic Venetian-style sawmill, whose building has been completely renovated.

The museum is structured on three floors, each dedicated to a specific theme, but all concerning the history of Cortina and the "Regole d'Ampezzo". It goes from life in the mountains with in-depth studies of the various forestry and pastoral activities, to the ingenious solutions adopted to guarantee all families a fair lifestyle. For centuries (and in part still today) life in Ampezzo was regulated by the Laudi, which defined the rights of the families of Cortina. Every household disposed, for example, of a yearly specific amount of free timber for home repairs or fire. In addition you can also see some of the local handicrafts, such as silver filigree or traditional clothes. 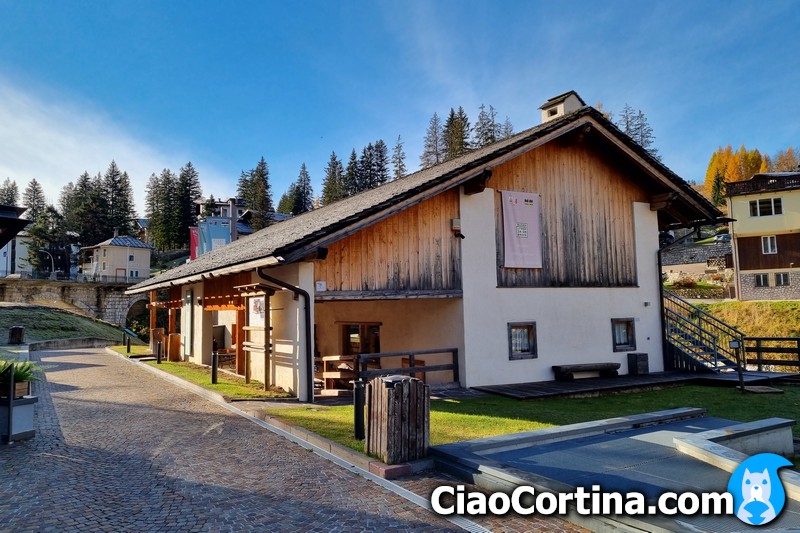 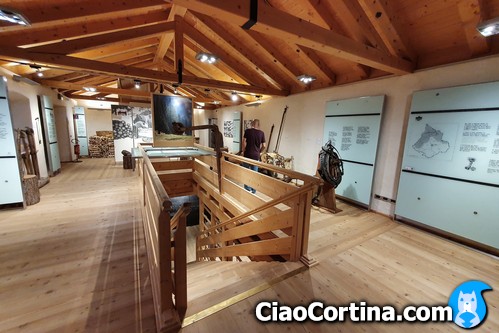 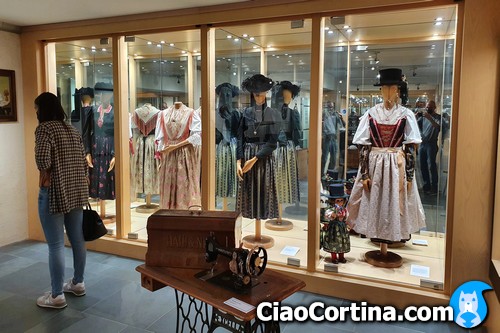 Among all the exhibits, the two that most attracted our attention were the Gilardoni Rifle, a lethal compressed air weapon built by Bartolomeo Gilardoni, watchmaker and blacksmith of Cortina d'Ampezzo, which caused a lot of headaches to Napoleon's army and the reconstruction of the Castle of Bodestagno, once a fundamental stronghold for the defense of Ampezzo and today present only as ruins.

It's also possible to see many other objects and machinery, such as the original mechanism of the clock of the bell tower of Cortina, as well as other interesting instruments of life in Ampezzo, accompanied by photographs and very interesting descriptive cards. Definitely, the Ethnographic Museum "Regole d'Ampezzo" is a must-see for anyone who is fascinated by life in the past, which was undoubtedly less easy than ours, and by anyone who is curious about the Ampezzo traditions. Those who want more information can visit the official website of the museum, from which you can also access the ethnographic museum youtube channel, where some of the exhibits are described. 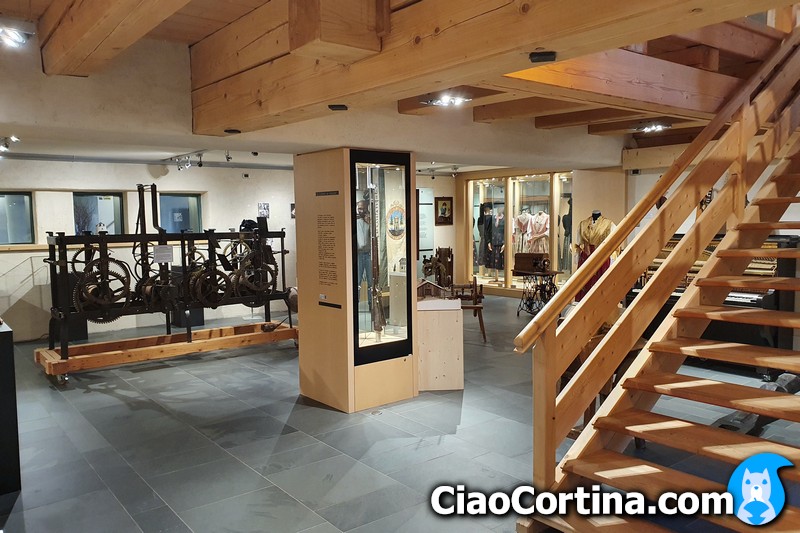 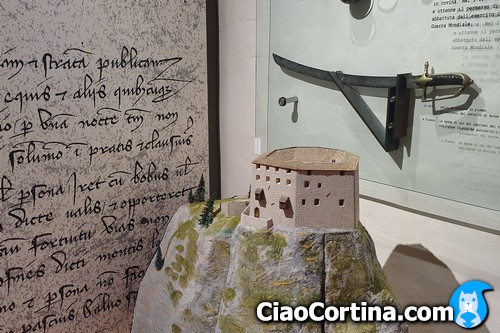 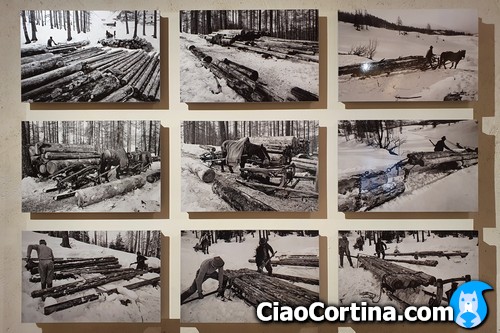 (1) The mechanism of the bell tower clock. (2) A reconstruction of the castle of Bodestagno. (3) Some vintage photographs.
Continues after the AD...

Surely the three museums of the "Regole d'Ampezzo" are excellent alternatives to spend a few hours in Cortina d'Ampezzo, especially if the weather is not the best. They are also very educational places, especially for the new generations and for the youngsters who are forming their conscience and intellect. Museums are a source of inspiration for everyone and we recommend visiting at least one every time you go on vacation in a new place.

Hoping you liked the page on three museums of the "Regole" of Cortina d'Ampezzo, before saying goodbye, we would suggest you to read all the articles we wrote about Cortina d'Ampezzo by clicking here.