The bell tower of Cortina, known as el cianpanín in the traditional dialect, is undoubtedly the most representative symbol of Cortina and has been the pride of the town for over a century. Made entirely of Dolomia, the same rock of which the Dolomites are made, it stands white and proud and is clearly visible from every point of the town.

Completely made of Dolomia, the same rock of which the Dolomites are made...

This page is inspired by the beautiful book "El Cianpanín, storia del campanile di Cortina d'Ampezzo" by Mario Ferruccio Belli, where the author describes with many details the built of the bell tower, alternating it with original documents of the times, photographs and curiosities. It is a beautiful book to buy or give as a gift, but consider that it's written in italian. 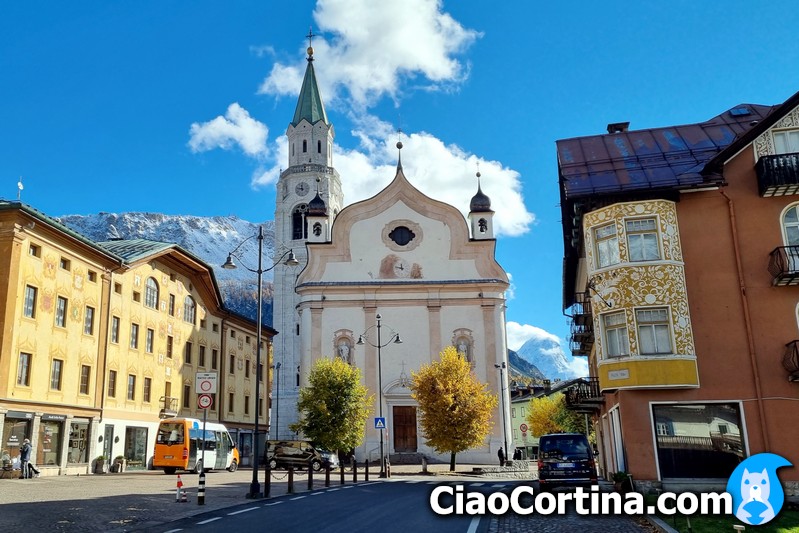 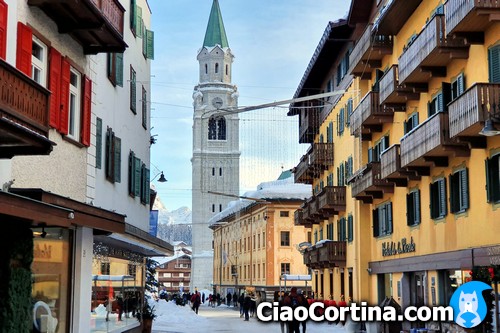 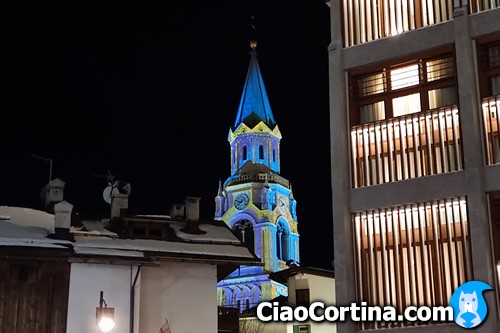 (1) The basilica and the bell tower. (2) The campanile in Corso Italia. (3) Projections on the bell tower during the fashion week.

The bell tower of Cortina, as we know it today, was erected by Silvestro Franceschi to replace the old bell tower from 1590. It was quite anonymous and was beginning to give some signs of abating. The problems began with the cracking of a bell, but then worsened when pieces of stones and lime started to detach from the structure. To avoid further accidents, in 1846, the municipality of Cortina decided to demolish the previous bell tower to build a new one. A temporary wooden bell tower was erected, to continue to notify the passing of the hours. It was a time when few people had a watch on their wrist and a way to signal liturgical celebrations and prayers was necessary.

After evaluating many different projects, the municipal administration decided to follow the idea of the engineer Hermann Bergmann from Vienna, who designed a bell tower in Byzantine style, that was not Tyrolean nor Cadorean, to represent the individuality of Cortina.
The bell tower has been made of the same white stone of which the Dolomites are made. A perfect quarry for this type of rock was identified at "Crepedel", a locality near Acquabona, a fraction of Cortina. The name of the locality comes from the dialect word "i crepe", translated as "the rocks", or "the mountains", because in that position the rocks of Mount Faloria start to rise from the meadows.

The excavation of the foundations began in May 1852, but it will take until 1858 to hear the sound of the first bell. The whole construction went through a series of logistical problems, very interesting administrative and social aspects and is narrated in detail in the book by Mario Ferruccio Belli. For the more curious, however, we will summarize below the salient points. 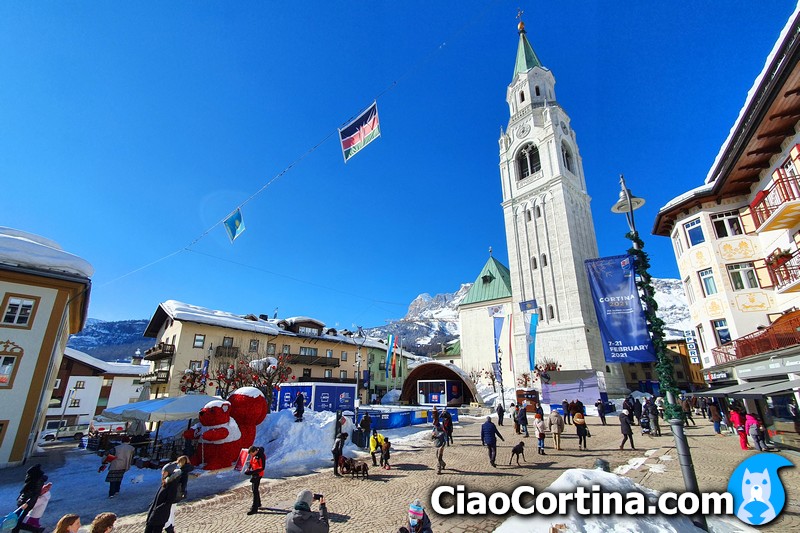 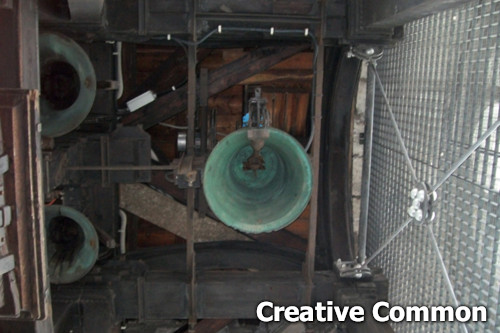 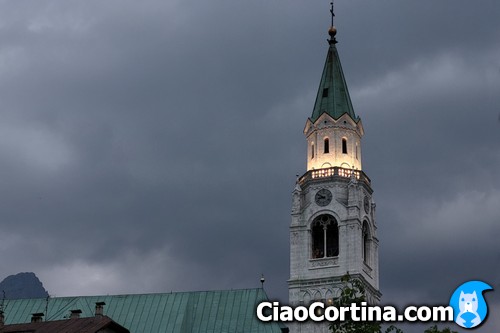 Such a majestic bell tower must have a concert of bells that is at the same level, for this reason the administrators of Cortina, despite the large expenses already incurred, did not want to save. There was a company in Innsbruck that was very serious, and they were well known in their sector. At the time it was called Grassmajer, today it's known as Grassmayr and is still active in the bells industry. The initial idea was to use three bells, as they were originally, but later it was decided to upgrade to a 6 bells chime, harmonized in the key of Bb.

The bells are the same that were forged in 1857. Probably not everyone knows that most of the bells that could be heard in Italy nowadays are not originals, they are copies. World War I required huge quantities of lead to make guns, and church bells were the easiest way to get it.

The bells of Cortina, however, were saved thanks to the emperor Carlo of Astria who, passing through the Ampezzo area and hearing the sound, decided to save them from the forge, because he loved it. In memory of this event, a commemorative plaque was placed on the bell tower door. Consider that more than 1048 bells have been forged by the Grassmajer company, but nowadays only nine survive, six of which are in Cortina.

Before concluding, we want to tell you some curiosities about the Bell Tower: