Cibiana di Cadore, the village of the murals, is a small town that is located near Cortina d'Ampezzo and has become famous all over the world thanks to the murals painted on the facades of the houses. Both local and international artists have contributed to make Cibiana a true open-air museum. In every glimpse of the village you can breathe history and tradition, so it's an ideal place to spend a day immersed in culture and art.

The murals transform Cibiana in an open-air museum...

Cibiana di Cadore is considered one of the most beautiful and suggestive villages in the province of Belluno, we strongly recommend you to visit it if you have the opportunity to include it in one of your itineraries in the surroundings of Cortina d'Ampezzo.

How to reach Cibiana

Cibiana can be easily reached

from state road 51 of Alemagna. Just before Venas di Cadore you must turn right, in the direction of Zoldo Alto and Passo Cibiana. The intersection is well signposted. Starting from Cortina d'Ampezzo it takes about 40 minutes, for a distance of 33 kilometers. Unfortunately, this is not a particularly panoramic or interesting route. Since it is a narrow mountain road with sharp turns, it is advisable to go slowly and use the navigator. If you don't have a car, it is possible to reach Cibiana also by bus, but the very few runs that cross it could make the organization a bit complicated.

Once you reach your destination, you will find a large parking lot on the left, just before reaching the town. In peak season you may find some traffic, so we recommend leaving early in the morning, especially in case of uncertain weather, to increase the chances of finding a car parking.

The idea of the murals was born in 1980 thanks to the intuition of Osvaldo Da Col and Ludovico Calabrò, who were looking for a way to promote the village and attract some tourists, to try to stop the loss of residents that has passed from the 2000 inhabitants of beginning century to less of the 400 of present time. 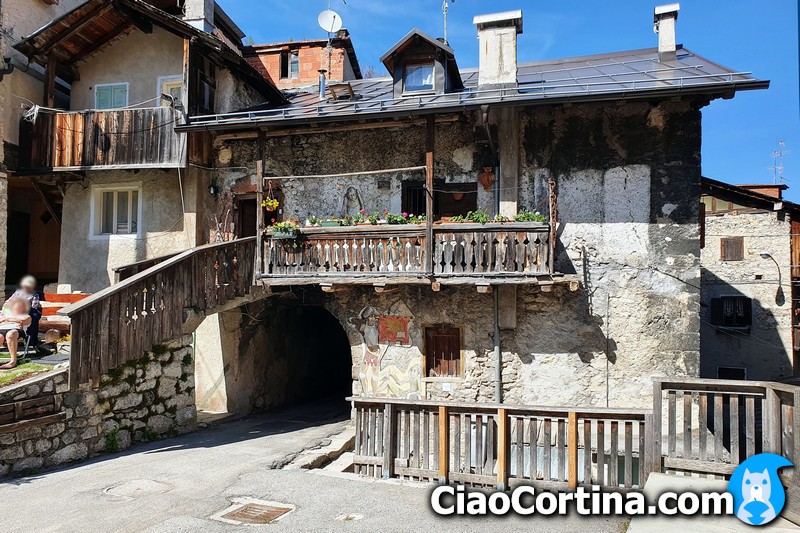 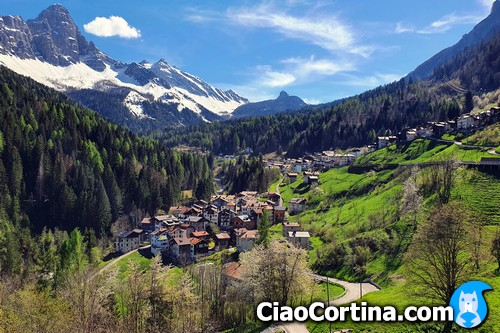 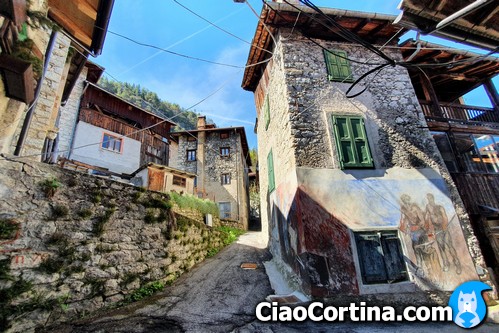 Osvaldo worked as ice cream maker in Germany, and when he returned home was always fascinated by the religious-themed frescoes that decorated the houses along the road between Austria and Bavaria. After discussing them with his close friend "Vico," an artist established internationally, they had the idea of painting similar works in Cibiana as well.
The genius intuition, however, was to not just make a few murals and then stop, but to make two or three murals a year, so as to always keep the attention on the project high.

The second great intuition was to paint the murals only on the oldest houses of Cibiana, representing a subject related to the history of the building. In this way were born frescos such as "la Botega", that means the store "i Faure", that means the blacksmiths and "al Stagnin" that is the one who dealt with small repairs of the tools, all paintings inspired by the village life of the past. 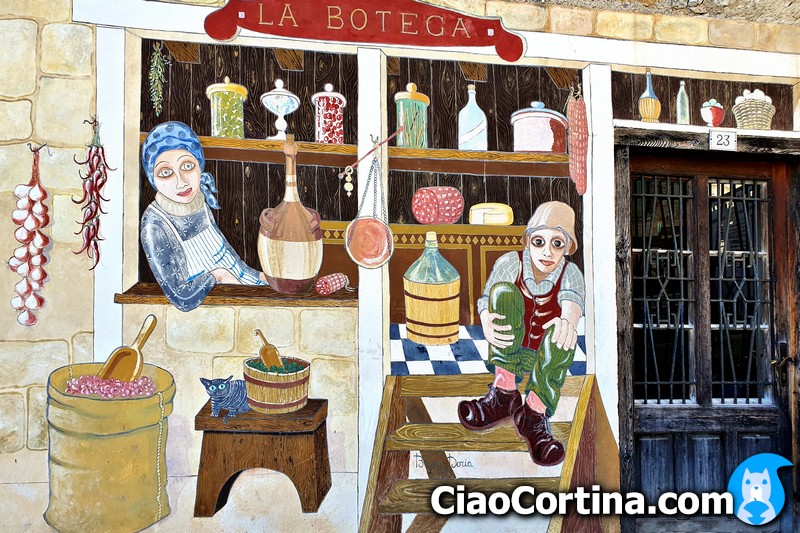 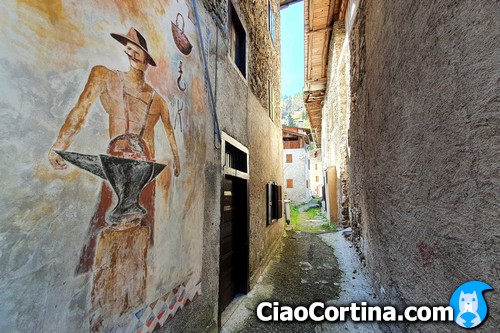 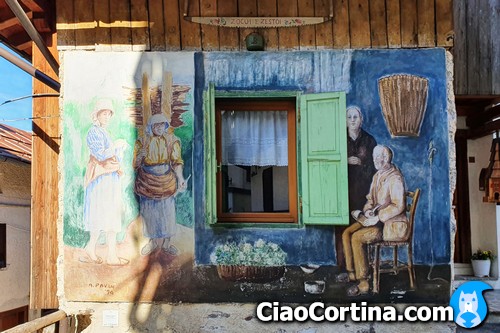 Other murals portray stories, legends or characters linked to tradition, such as the fresco of the fire in "Pianezze" where the fire that enveloped the homonymous district in 3 August 1852 stopped "for divine providence". Another example is "La Visciades" by Paolo Meneghesso, which describes the activity of bird hunters with mistletoe.

As mentioned above, murals are constantly evolving, with two or three made every year. The painters who come here to paint follow a motto that is really touching: you come to Cibiana not to take glory, but to bring it.

One of the latest works created comes from Roberto Bianchi, naturalist painter residing in Cibiana di Cadore who wanted to leave a memory inspired by his paintings, in fact he specialized in oil representations of the dolomite fauna. 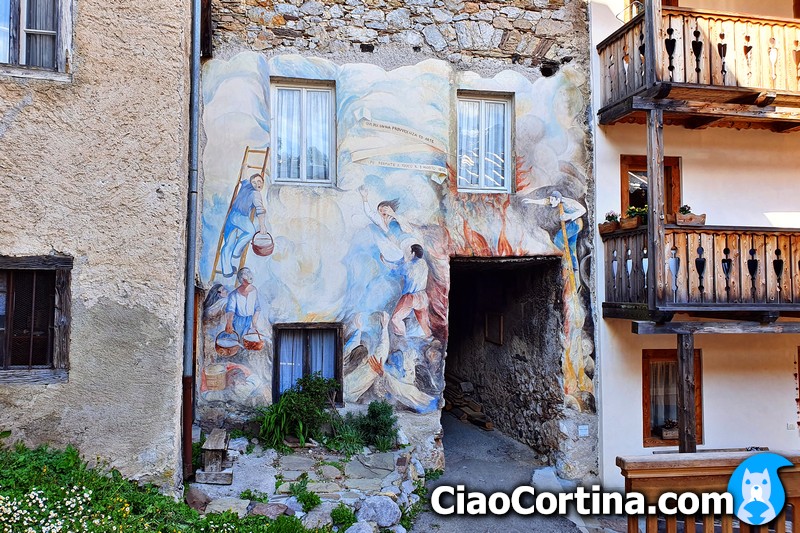 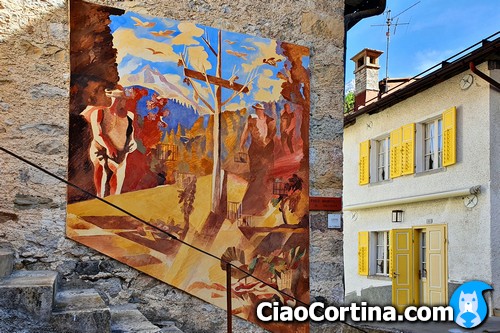 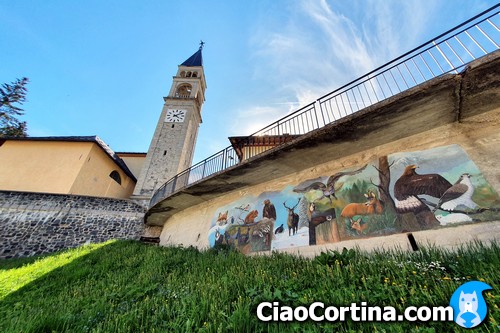 The murals, actually more than 50, are scattered along the three districts in which the town is divided: Masariè, Pianezze and Cibiana di Sotto. To see all the murals you need at least half a day, in which you will have to walk for a few kilometers along the small streets that cross the town. Fortunately there are many fountains, which allow you to refresh and drink some water between one mural and another. The inhabitants of the village are all very courteous and used to tourists, but remember that these are people who live in Cibiana, they are not there to entertain guests. Try therefore to be polite, respectful and do not enter private property. Here you can download a map of all the murals from the official website of Cibiana.

, or you can drink a beer at Bikers' Bos bar

, a place where you'll relive the emotions of a traditional village bar.

So, what is the mural painting technique that has been used to paint all the murals of Cibiana? It is a painting technique very similar to that of the fresco: the colored pigment is applied directly on the fresh plaster. This allows the mural to become one with the wall where is drawn. First of all the outline of the subject is traced, then the painter moves to the large backgrounds and, only at the end, the attention goes to the details.
Initially this painting technique was used for political propaganda images, but in 1900 it was rediscovered as a purely decorative technique. In Italy, in addition to Cibiana, there are other examples of murals, such as those of Dozza, a medieval village located in Romagna or Satriano di Lucania, a town in Basilicata, considered one of the most influential villages in this sector.

The foundation of Cibiana di Cadore took place over a thousand years ago, when the barbarian invasions pushed the populations that lived along the Cadore valley to move, in order not to fall victim to pillage. However, the town reached the peak of its expansion during the Venetian domination, when the iron mines of "Ciarsiè" and "Ronzei", on the right side of Mount Rite, has made Cibiana one of the largest suppliers of keys and artillery bullets of the "Serenissima", as Venice sometimes is called. Iron extraction continued for more than three centuries and closed definitively around 1770. You can find many testimonies of this period in the Museum of the iron and the key, in Cibiana di Sotto.

In the following centuries the village maintained itself with the trade of keys and the pastoral activities, but due to the crisis following the first world war many residents emigrated, mostly to work in the ice cream parlors in Germany. During his travels to return home, as already mentioned above, the current president of the Pro Loco Osvaldo Da Col had the inspiration for the creation of the murals. Nowadays the village survives thanks to tourism and to the trade of keys, an activity still central to the local economy, thanks to the company Errebi that offers work to over 60 people. 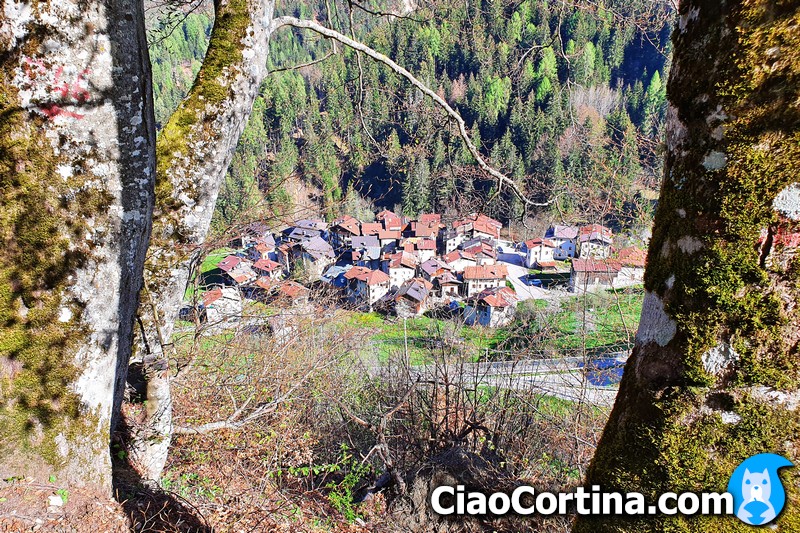 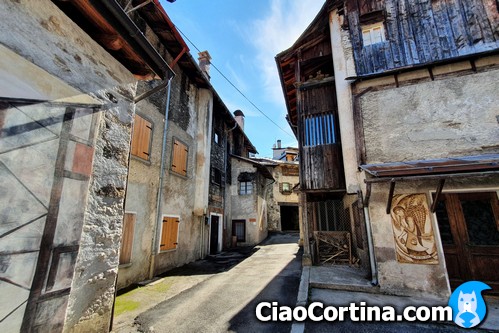 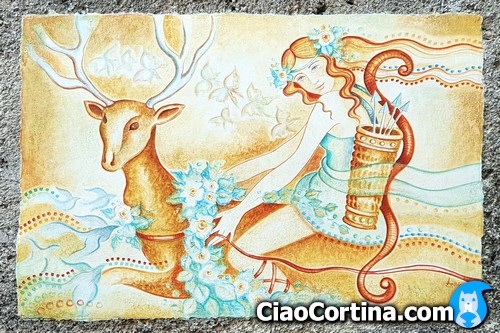 The village has gained more tourist visibility thanks to the filming of a famous Italian television series, called "Un passo dal cielo". The major part of the eleventh episode of the sixth season has been filmed in the district of "Masariè". The series is really followed and the sixth season has been viewed, in Italy, by approximately 5 million people, which is almost a record for an italian product.

The museum in the clouds

In 2002, on the summit of Mount Rite, was inaugurated the MMM Dolomites, also known as The Museum in the Clouds. This museum is a part of the famous Messner Mountain Museum, that is the reason for the acronym MMM. It is a museum project composed of six structures located in as many locations in South Tyrol and Belluno. The work has been realized thanks to the commitment of the well-known mountaineer Reinhold Messner to raise the awarness of mountain life and connect people with nature.
The heart of the museum circuit is located in "Firmian", inside the ancient walls of "Castel Firmiano", while the other structures have been erected in "Corones", "Juval", "Ripa" and "Ortles" and, obviously, in "Cibiana". Each museum has in common the theme of life and exploration of the mountains. For more information we invite you to visit the official website of the MMM project.

The museum in the clouds of Cibiana rises on the ruins of an old fort of World War I, built to stop the advance of the Austrian empire and later used by the partisans as a refuge. The restoration of the building has tried to preserve the original spirit of the fort, maintaining a part of the original structures and creating three glass observation points where in the past the cannons were placed.

After the realization of the Dolomites Museum, Reinhold Messner inaugurated a small museum called Campo Base, an exhibition dedicated to the history of mountaineering, where it's also possible to see the original tent that Messner used in the climb of Mount Nanga Parbat in 1978. It is located in the Cultural Pole of the Dolomites, at the Taulà dei Bos, in the district of "Masariè".

If you want to deepen your understanding of the subject I would suggest you watch this fascinating video on youtube, where you can hear the story of Cibiana directly from the voice of Osvaldo Da Col. The only problem is that it's in italian. Maybe you could try to use the automatic subtitles and translation feature of Youtube.

Hoping you liked this page on Cibiana di Cadore and its murals, before saying goodbye, we would suggest you to read all the articles we wrote about Cortina d'Ampezzo by clicking here.